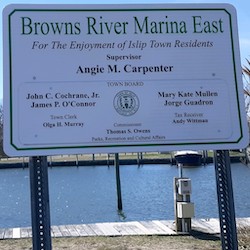 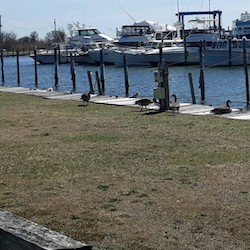 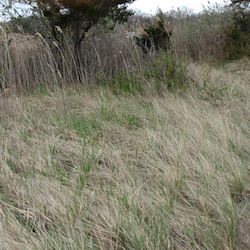 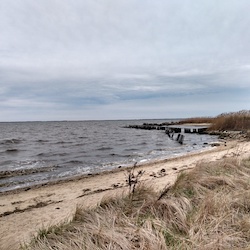 Overall Park Observations: This marina is located right on the outskirts of the Great South Bay. It's a small marina but sufficient enough for the small community of Bayport. The area is fairly clean. And there was a civilian that was picking up a small amount of litter that lined a small area of the parking lot. The marina is surrounded by beautiful homes and is very tranquil. [Editors Note: The Browns River Marina East is listed as a park by the Town of Islip, and is adjacent to Browns River Tidal Wetlands Area; there is one put-in point for canoe, kayaking unconfirmed] - There is also a beach that has suffered from a great deal of erosion. When I visited, it was high tide and most of what was left of the existing dock was under water. The only parking for the beach was on the residential side street. [Editor's Note: Beach access point southern end of Seaman Ave, with small sandy trail access. Owned and was used by SC Community College for marine sampling, etc.]

Long Island Explorer: The grasslands (beach grass) outlined the parking lot. And the marina spills out into the Great South Bay. There was a large area of beach grass surrounding the entrance to the beach.

Trail Observations: There weren't any visible parks or trails. It is a small marina surrounded by a residential area. There is a very good restaurant, the Cull House, that sits right outside the marina area. The only downfall - the restaurant does have to close early at times when it's high tide. The parking lot gets flooded. [Editor's Note: There are roads that can be walked on to further explore the Browns River Tidal Wetlands Area]

Wildlife Observations: I did observe a lot of geese and seagulls. And an adorable duck family sitting by the marina. (I wish I was doing these reviews in the warmer weather. I would probably observe a lot more wildlife. But there were a family of ducks and plenty of geese and seagulls. There were also pretty park benches dedicated to locals who lost their lives. Bayport is generally a very tranquil town and the marina follows suit. As I mentioned earlier, the signage could be larger and more of them.)

Marine Ecology Observations: I only observed beach grass} on one side of the parking lot. If the weather was warmer, I might have observed additional plant and animal life. Viisting the beach, the existing dock that was an extension of the adjacent beach was damaged and under water due to high tide. The beautiful beach area has been affected by coastal storms and there was a great deal of erosion.

What Needs Improvement: The only thing that could be improved (made much larger) is the signage. Especially the sign that says "DANGER - SHALLOW WATER - NO DIVING". Not only should it be much, much larger, but maybe more than one sign should be posted. [Editor's Note: Apparently no interpretive signs about the Brown's River Tidal Wetland Area.]

Save The Great South Bay

Approximately 2.4 Miles from your location

Approximately 3.4 Miles from your location

Approximately 4.3 Miles from your location