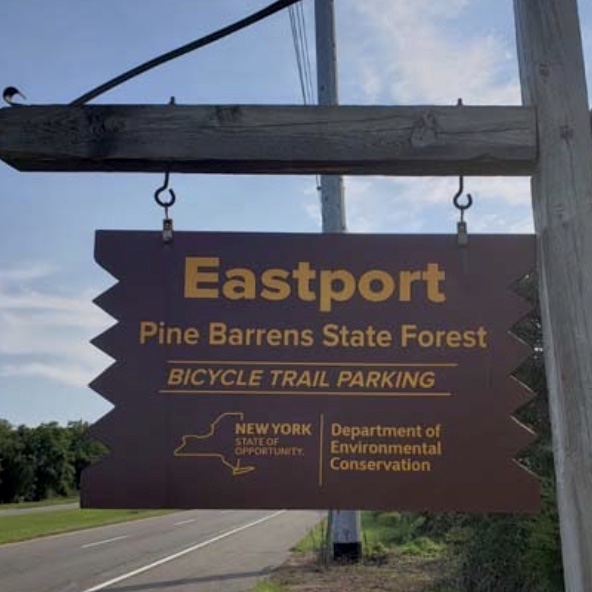 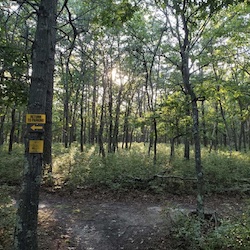 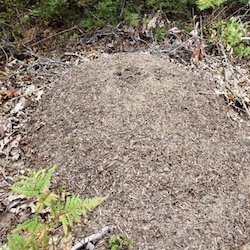 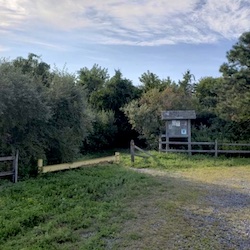 Did not know Long Island could offer such a vigorous and dynamic mountain biking experience on the Eastport Conservation Area Mountain Bike Trail.

Overall Observations: Wonderful surprise of a local park experience. This is a winding 8-mile trail that starts and stops at the parking area. There are additional loops throughout that add distance and difficulty to the experience for approximately 10 miles worth of trails for exploration. Mountain bikes, walking, or horses can be used in this pursuit, though the park is clearly geared for mountain biking. Trail is not suitable for any other types of bikes except mountain (though disc brakes not necessary). Nice change of pace as the parklands was not just pitch pine barrens, but a lot more deciduous growth, at times entirely so. The park has an undulating landscape of small rises and dips. There is not much to see here outside of just being in nature and catching an occasional glimpse of a forest critter. The main attraction is indeed mountain biking the trail/s. From a biking perspective, the trail widens and narrows throughout, though never uncomfortably so. There are countless turns and ample hairpin turns, so good brakes and gear control are an absolute must. A few steep drops are best left to those with plenty of experience and bikes should be walked down for anyone else. Luckily the trail has impeccable markings/signage (“blazes”), including “warnings” that call out any difficult sections or particularly sharp turns that need slowing down. One nice feature of this park is that there are cutbacks all along the main trail that lead back to the parking lot, so each visitor can choose just how much distance they want to cover during their visit. The trails themselves are well packed with minimal erosion and washouts (only in 1 steep place). That being said, the park is best enjoyed on a dry day, preferably not after any rain, as the trails can get quite slick from wet leaves/needles and mud. If timed right this trail can be had to oneself as it does not get too crowded with visitors at any given time.

Long Island Explorer: Finally! I encountered giant ant hills, a phenomenon that I had only heard about on Long Island, despite being given the impression that they were quite frequent. After visiting 100+ parks/natural landscapes in my lifetime on Long Island, the two mounds I found here were the first. These ant hills or mounds are actually nests made from carefully excavated soils stuck together with organic debris. While providing rudimentary protection from the elements and predators, a truly fascinating feature of these mounds is that they maintain a stable temperature and humidity inside regardless of outside conditions. This is particularly useful when raising sensitive larvae to maturity. Unfortunately, there are no good easily accessible online resources discussing ants on long island or who these “mound-builders” may be. All information is geared towards home extermination and the species of these natural architects continues to elude me.  (Editor's Note:  Allegheny mound ant)

Trails & Maintenance Observations:  This parkland/recreational area is located in Eastport, Long Island off of Country Rd. 51 (Moriches-Riverhead Rd.) which is its only entrance. Directly north of this park and sharing a boundary is the Long Island State Pine Barrens Preserve. In fact, towards the pinnacle of the main loop, there is a connector trail that leads to Manorville Hills County Park and the entire mountain bike trail network there. Pine Meadows County Park lies to the east. The southern and eastern borders are comprised of county roads and residential neighborhoods. There were no corridors, easements, or patches of open space of any kind at this park. Whether or not this park is maintained by any official county entity is unclear, but at the least it is dutifully looked after by a dedicated group of riders that have made many portions their own with fun names and obstacles as well as significant improvements to trail conditions and safety additions. There was really only one area where the trail was washing out and eroding into an unpassable mess, and it was evident that serious mitigation efforts were already underway. These included soil netting and wooden blocks hammered in to abate the erosional sloughing of the hillside. I found this park and its associated trails to be in great condition. The trails are cut back from any overgrowth, though heads up for taller visitors, a few places have low hanging branches growing across the trail.

Wildlife Observations: Aside from the songs and chirps of birds and an occasional rustle in the shrubbery and leaf litter, not a single animal of any kind was encountered. Tracks were also not noticed, as the primary focus is on maintaining pace along the trail. However, being on a bicycle kept me up and out of harm’s way from any ticks and questing areas, which were few given the tidy state of the trail edges. Would not suggest venturing off path under any circumstances however, since the entire area swarms with ticks on any given day ending in the letter “y”. There is also poison ivy growing along the forest floor in spades, encouraged by plenty of shade and moisture kept in by the thick canopy.

What Needs Improvement: A few minor issues: Garbage strewn about the parking lot. Not that there is an excuse for this kind of behavior, but perhaps placing a garbage can in the parking area would encourage some of the more challenged visitors.  The trail itself could use a good raking after winter as leaf litter accumulation makes trail soft in places (and slick) which is not conducive to biking. One further suggestion would be to place a printed map of the park on the bulletin board at the entrance. Preferably one with distances for the main trail and loops so people can know how much distance/difficulty they are about to undertake. I decided on the full trail with little thought to its length and definitely bit off just a little more than I could chew.

Approximately 0.8 Miles from your location

Approximately 2.1 Miles from your location

Approximately 2.5 Miles from your location