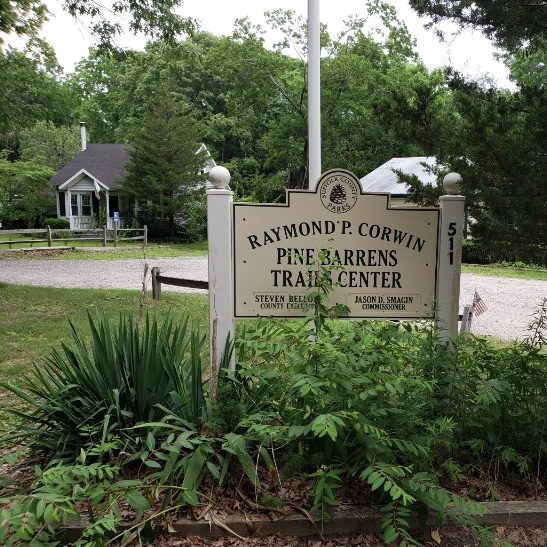 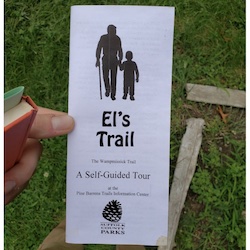 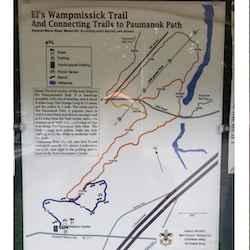 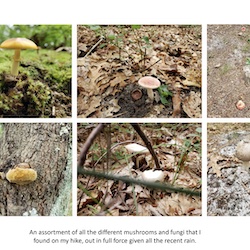 March 30,2022 -Dedicated PB Trail sign has been removed; The Kiosk, trials, and parks for public access and information is now questionable.

July, 2021  - Despite arriving during business hours on a Monday (3PM), the center was closed and in fact looked like it had been taken over by a bicycling club. Although I got no information at the information center, to my pleasant surprise, there was a small network of trails behind the building.

{ UPDATE: Brookhaven Bike Coop - "At the Manorville space, we have free bike repair clinics/ mechanics classes every Friday at 6:30- 8:30pm, though people tend to come early. We hope to expand that in late August. Other times are by appointment. But we have volunteers there almost every Sunday afternoon and in there at various times about 3 days a week."}

This Park offers two main trails, blue and orange, shorter and longer, respectively. The blue trail is wide and well maintained allowing easy access into the Pine Barrens for people who may be novice hikers or have difficulty getting around. The orange trail is also well maintained but provides for slightly more strenuous conditions and receives brushwork less often than the blue.

There are also a few off-shoot paths and the Paumanok Path that intersects with this park and runs concurrently with the orange trail for a little way. The self-guided tour of El’s Path found on the blue trail is a wonderful simple addition to this park that has a much more profound impact on people than most realize. A simple pamphlet and numbered posts allow for much more interaction and active engagement with the environment/local history and leads to opportunities for sustained learning, as opposed to hiking for hiking’s sake as is so often the case.

The self-guided tour hands down. Instantly allowed for learning about the environment instead of just observing it.

Despite visiting only 3 days after the remnants of Hurricane Elsa passed through the area, the trails were relatively clear and there was minimal storm damage. The few fallen limbs that impinged the trail were easily taken care of as I went. Not sure if the actual trails center is permanently a bicycling club headquarters or if I just arrived on an off day. The number posts for the self-guided tour are low to the ground and perfectly camouflaged to the environment (I was not able to find all of them!), could use a little blaze/marking. Other than that, really cannot think of much, besides the prevalent dumping of trash along Mill Rd. and in the powerline corridor, which is unfortunately just outside the jurisdiction of this park.

Nature’s remarkable ability for recovery and reclamation: One aspect of my visit that stands out is stop #4 on the self-guided tour which brings one’s attention to the abandoned railroad bed and ties. Despite the area having once been “tamed” and developed, most passerby would never notice nor know of the historic existence of the railroad. So thoroughly and vigorously has nature reclaimed what was always hers that a structure that was once capable of carrying a train had been reduced to little more than a linear dimple in the forest floor. The few timbers left were hardly distinguishable form any other decaying and fallen tree.

Freshwater: While certainly not the driest of landscapes this park has very little in the way of water features. On the northeastern side of Mill Rd., the orange trail passes close by to a potential springhead/feeder into Peconic river, making the immediate area much more swamp like and filing the air with a pungent smell of decay. A few reeds were visible through the relatively thick brush, though they seemed like invasive phragmites.

Trails - Both the blue and orange trails are in terrific shape overall, needing only a cursory walk to clear some very minor storm debris. The yellow and white (Paumanok Path) trails are more overgrown and present terrific tick questing sites, however, since they are not loop trails, they seldom get visitors. There is a powerline corridor that runs along the northeastern boundary of the entire park and the trail often veers close to it. The corridor shows signs of vandalism, ATVs, dumping, but luckily little of this activity encroaches onto park land. Since the Paumanok Path runs through it, this park is connected to a slew of others in the area including Robert Cushman Murphy County Park to the Northwest and Manorville Hills County Park to the Southeast.

Wildlife - I visited on a relatively quiet day and had the joy of having the park to myself. Despite my quiet approach, very little wildlife made itself obviously apparent to me. There was bird song and a couple of rustlings in the brush. Near Mill Rd, I spotted a good-sized group of deer, mixed doe, young, males. I found a few burrows, attributable mostly to chipmunks and insect life. A fallen woodpecker feather was a nice little surprise. Undoubtedly the star of the show was the fungal life. Most of the week prior was quite humid and rain logged, and the varieties of fungi did truly abound. Pops and splashes of color were throughout the woods, pinks, yellows, nearly neon oranges, red, and every shade of white to brown. Ticks did not seem bad at all, though unsure if due to environmental conditions or if I just finally got my protective gear right. I did not discover any on me during or after my visit.

Feb. 2021 - A great trail center and historic building in Manorville, with trails leading into the Long Island Pine Barrens. For many, many years, the LI Greenbelt Trail Conference jointly managed the Pine Barrens Trail Center with Suffolk County Parks. Due to lack of resources both bailed out, and the building closed. More recently Quality Parks attempted to reopen the building, spearheading an initiative for several nonprofits to rally together and work with Suffolk County Parks to reopen the building.

Suffolk County Parks declined to sign a contract with more than one environmental organization, nor with Quality Park who rightly so didn't have the resource to run it alone.  A fall back measure was to gain key access, which was denied. The building locked.   More recently, the Manorville Historical Society has been in negotiation with Suffolk County Parks.   Meanwhile, yearly "Spruce Ups" and needed repairs reporting of the grounds and the building have stopped.

Approximately 0.8 Miles from your location

Approximately 1.3 Miles from your location

Approximately 1.9 Miles from your location