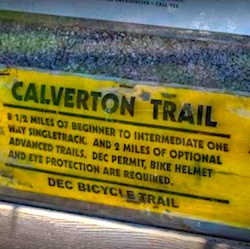 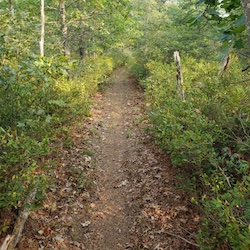 Overall Observations: This parkland has only one entrance and it is off Middle Country Rd. (Route 25) between the entrance to the Wading River Motel and the Calverton National Cemetery. This park is located in a wonderful region that is already packed with recreational opportunities, most directly and notably the additional 10 miles of (paved) biking available caddy-corner across the road. The parking area by the entrance was sufficient to hold 15 cars or so.  Trail is as follows: DEC sponsored Calverton Mountain Bike Trail, 8.5 miles of beginner to intermediate one-way single track and 2 miles of optional advanced trails. DEC permit, bike helmet, and eye protection are required. The trail can be hiked for a leisurely stroll in nature but offers very little to see and would be less than ideal considering all the twists and turns that only elevate a biking experience. Horses were not allowed on this trail, unlike other nearby mountain biking parks. The geography is somewhat flatter than Manorville Hills or Eastport Conservation Area (next nearest mountain biking parks/trails) but still boast plenty of fast winding riding. The additional black diamond loops dive in and out of kettle holes and provide much more challenging elevation changes. One wonderful feature that’s here as well as on the Eastport trail is cutback loops that are periodic along the main trail and lead back to the parking lot, making it easy to ride just as much as you want, or tap out if getting too tired. Vegetation is a mix of evergreen and deciduous flora, and the woods are relatively thick, making lines of sight short and vistas/views non-existent.

Long Island Observations:The most notable natural observation I made at this park comprised of my encounter with two deer. While I live amongst hundreds of deer around me, this was a little different experience. I was zooming down the trail when I turned a corner directly into the sight of two deer grazing trailside. I rode up on them so swiftly and all sudden that all three of us just froze in our tracks. I expected them both to bolt instantly, as all deer do, but perhaps due to the nature of my surprise they froze in their tracks and didn’t know what to do. A second or two passed and as we stared at each other, eyes deadlocked, one deer started stamping and stomping his hoof into the ground, clearly standing his ground and telling me to move along. I had never seen such confidence in a deer before. It was a moment as fascinating as it was unnerving, unsure as I was of whether it would charge me or not. I slowly got my camera out, snapped a photo, said goodbye, and rode on down the trail.

Freshwater Observations:  This park contains no aquatic features of any kind and neither maps nor firsthand observation spotted even a rivulet let alone an active stream. There was however evidence of ancient freshwater in the form of kettle holes which had been made into additional trails featuring riding obstacles and arduous terrain. One kettle hole is near the pinnacle of the trail at the northern edge of the parkland and is called the Scuttle Hole. It is a serious depression that can even be seen from aerial/satellite photos. There used to be trails and benches leading directly to it for pedestrian enjoyment, but that seems to have given way to riding trails.

Trail Observations: This mountain bike riding focused parkland is nestled between a residential neighborhood to the west and the Calverton National Cemetery to the east. However, it is worth mentioning that immediately next door to this park entrance is the Wading River Motel, which is a Department of Social Services shelter ran by some agency. The general area they loiter is a stone’s throw from the parking lot and even connects. Recommend keeping no valuables visible in the car or better yet leave at home. Lock all doors and only frequent the park during daylight, refraining from early dusk or late dawn. During my visit, the park’s lot was used for a more than nefarious business transaction between a denizen of the motel and a passerby traveling “salesman”. Other than that, park itself has no utility corridors or encroachments of any kind. In general, there are many local/state/county parks in this area, which boast recreational opportunities of all kinds. Veterans Memorial Park is directly across the street and just north is Wildwood State Park, another expansive park complex.

Wildlife Observations: The dense nature of the woods at this park and the winding twisting fast paced trail is not conducive to spotting wildlife. Birds can be heard chirping across the canopy, and light rustles in the understory as you ride past but that’s about it. I was fortunate to encounter two interesting deer (see explorer observations above). The trail is not overgrown at all, and the bike keeps one well above the level of questing ticks in the grasses/brush. Ticks present in large numbers, but basic protection should be satisfactory.

What needs improvement: Really quite well looked after park, the mountain biking community on Long Island really seems to take these designated biking parks under their wing and maintains them above and beyond state/county resources. This park in particular looks less officially serviced but visited more often than others by conscientious visitors that take it upon themselves to keep it in good order. The trail is a single track, not too wide, but quite deeply cut into the ground (from lots of use) as compared to nearby parks. Growing plants/shrubbery nudge up right next to trail but seldom ever encroach in. A handful of overhead limbs to watch out for, but all hazards and difficult portions are blazed. The whole trail/park has ample signage. The Parking lot at park entrance has a massive tree fall that is blocking parking spaces and a portion of the exit/entrance. It is rotten/punky wood and so should make for easy clean-up.
[Editors's Note: Tree Fall CLEANED UP in Nov. 2021 by CLIMB, but also someone might be living in a van in parking lot.]
News
July-Sep 2021
Oct-Dec:2021
What's There?
forests & woodlands
hilly terrain
pine barrens
What's Doing Great?
boundaries
interpretive signs
natural conditions
protection
trails
What Needs Improvement?
illegal drug & related activities needs
tick bite prevention needs

Approximately 0.1 Miles from your location

Approximately 1.3 Miles from your location

Approximately 1.7 Miles from your location