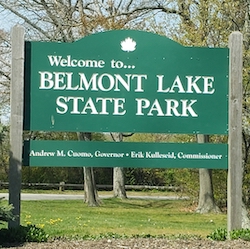 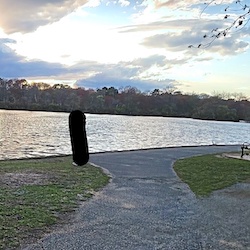 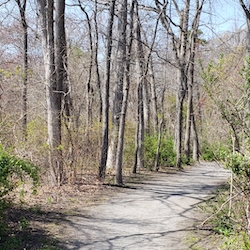 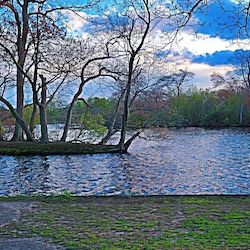 A trail fit for walking and or running on, a small pond where lots of ducks stay in! (Super cute), A large lake with geese and ducks and Lots of trees!! Areas to play volleyball in, 3 play grounds for younger kids, a bathroom, A large parking aea, An area to go on small boats during summer, sometimes an ice cream truck, an area to eat lunch in. Overall, really enjoyable park, great for walking around or just doing outdoor activities. Noteworthy: spaces for eating

Walking through Belmont Lake State park I noticed a number of signs telling pedestrians where certain locations and destinations are. There were also signs telling people about certain animal and plant species in the park. Then I saw a number of bird species inhabiting the large lake and rivers. This lake is very accessible. Finally there were a large amount of garbage cans so people can dispose of garbage properly.

I come here year round and it's always enjoyable. It's very spacious and you have so many things to do. I see see a big pond, bike/ hike trails, big fields, lots of picnic tables, kid playgrounds, an ice cream truck. I see regular paddle boats and swan paddle boats. The park is very large with a lot of open space and picnic areas. There are not too many different types of plants, but a ton of trees.

The pond of ducks is my favorite. The water is not too much that it's flooding onto the trail, it's to the side of the trail and it's very nice to look at and to watch the ducks, sometimes ducks go onto the trail but it's not a bother it's so cute to watch. The water itself could use a clean though? When I went there was lots of brown stuff in the water. I don't think it was dirt though.

I noticed a large amount of Canada Geese (Branta canadensis) inhabiting the waters of Belmont State Park. The Canada Geese seemed to be diving down and swimming under water to search for food. Also the Canada Geese stayed in the center of the lake surrounded by some islands with tress on them.

The water isn't very clean for swimming in. But it's clean enough for ducks and geese to live there and to use boats on.

There are a few small bridges that span over small creeks. There are a few small areas of land in the middle of the lake that appeared to contain trees and grass.   Belmont State Park has a fresh water lake and multiple rivers. In these waters I noticed Canada Geese, Seagulls, Swans, and Mallard Ducks. Also I saw some small fish but could not identify what type they were as they swam away, and since it is cold there were no water plants in the lake right now.

I didn't walk on the trail for that long but it's a very good trail, spacious and there's trees near it too, the trail goes around the entire park and has different directions .

There were a few trails that connected different areas of the park. The trails were lined with trees, grass, and some plants. The trails were narrow and contained pedestrians and cyclists. There were a few creeks that flowed next to the trails. Belmont Lake State Park connects with Phelps Lane Park if you take the trail under the bridge to the left of the pond it follows all the way. the parks trails look pretty similar, they both have a lot of trees and dirt paths. [Editor's note: Phelps Lane Park is a very developed, and thus not listed in this directory].  The closest park located to Belmont State Park is Southards pond located just south in Babylon and there is a bike trail that connects these two parks together with signs telling you what direction to go in.

Geese and ducks were in the water, just relaxing. I've seen dogs there as well usually with their owner. That's all the wildlife I've seen other than a few nature bugs.

I observed geese, swans, and ducks in and around the lake and creeks. Ticks were not an issue today. There were also narrow creeks running toward the lake. These also contained ducks. This water had algae growing. I've seen swans and ducks swimming and eating bread. I saw a water snake and fish jumping in the pond, birds chirping and flying around in the trees, and people riding horses on the trails. I saw a lot of bird species including Canada Geese, Swans, Mallard Ducks and Seagulls, and small fish I could not identify in the water. On land I observed a large amount of grey squirrels and I saw one sparrow.

Trail maps, signs for trail location and where you are.

The benches in the picnic area are old and some are breaking, so they could use some new ones. The trails are nice, but they are a bit narrow and not much room for people walking and biking. It would be improved if they had a separate area for biking and walking. There are no rails or signs to protect people from the lake. Additionally, the bathrooms could use serious renovation.  Overall Belmont State Park is very clean with little to no garbage in the lake and grass areas. However, I noticed a decent amount of garbage in the river systems, so cleaning up the rivers should be improved.

*** Editor's Note: In the off season there's a good wilderness experience.


Information on the Ongoing Projects at Caumsett State Park

Approximately 2.8 Miles from your location

Approximately 3.2 Miles from your location

Approximately 3.2 Miles from your location